I have been so overwhelmed the past week since winning the Teosto Prize* from all the positive responses and wonderful greetings!

Now I would like to share with you a few pictures from the event. It feels unbelievable that I was given the chance by Dalia Stasevska and Lahti Symphony Orchestra to compose a work for them and the European Green Capital Lahti 2021, a work about climate change, and it feels even more unbelievable that this for me so important work also now won the Teosto Prize 2022! Huge thank you to both the pre-jury, who selected my work for nomination as well as the final jury who awarded me the prize!
Also a big congratulations to the other three winners, Yona , Linda Fredriksson and Evil Stöö as well as to all the other amazing nominated composers!
I would also like to give a huge thanks to my family and friends who have been there for me and have supported my choice to become a composer, in both good times and bad. Never once did my parents question my decision to become a composer, on the contrary: it was my mother who suggested I’d study composition in the first place, so an extra huge thank you to my dear mother, who suggested this path that has felt right ever since.
I’m very honoured, happy and proud to be the first woman within classical music to win the Teosto Prize (which has been handed out since 2003). However I would like to draw attention to the fact that I’m by no means the first woman who could have won the prize. I would like to thank all the amazing women within history who have composed amazing music and have been part of the slow transformation toward a more diverse cultural field. A special big shoutout to Kaija Saariaho who has inspired the whole world through her personal music. Looking forward to an even more diverse future within culture as well as in general!
*Teosto is the Finnish copyright organisation for music creators, composers, and publishers. The Teosto Prize is awarded since 2003 to “bold, original and innovative musical works” and it is one of the biggest art awards in the Nordic countries. 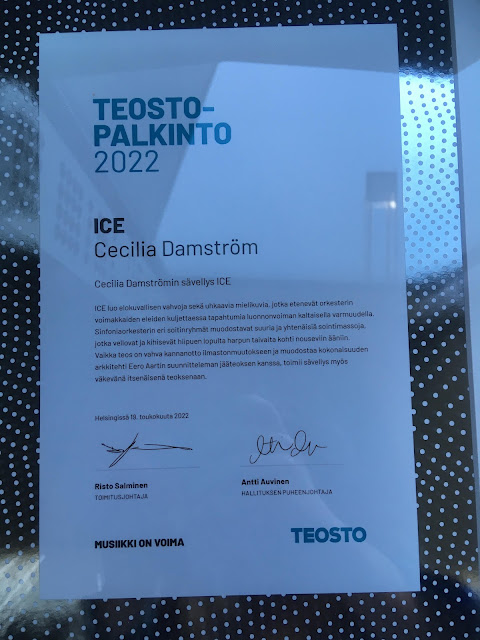 Posted by Cecilia Damström at 14:46