One Saturday afternoon Anna Angervo phoned me and asked me if it was okay for me if the ensemble TampereRaw would make a concert containing 45 minutes of only my music. I could hardly believe I had heard her right, it felt so unbelievable!

The concert was to take place during Tallinn Music Week on the 28th of March.Well, we all know what happened in March... I felt only a tiny bit disappointed because it had felt too good to be true in the first place anyway.But then Anna called me again and said that Tallinn Music Week had been postponed to August! All of the summer we have been waiting: will there be a new travel ban to Estonia?Keeping our fingers crossed apparently helped, because here we are at last! All safe and sound in Tallinn ready for the gig tonight at 6:30!
TampereRaw will be performing three movements from my Piano Quintet No 2 “AINO - Emotions from the Life of Aino Sibelius” and all of my first Piano Quintet “MINNA - Pictures from the Life of Minna Canth”.In addition I will be reading aloud wonderful texts written by Kaarina Hazard.Still finding it hard to believe it actually is happening! 🤩HOPE YOU ARE HAVING AN AMAZING SATURDAY AS WELL!!!☀️☀️☀️

Posted by Cecilia Damström at 05:00 No comments:

Helene - Nuances from the Life of Helene Schjerfbeck

My third piano quintet “Helene” Op.74  is the last quintet out of a trilogy consisting of three large form works with the theme “Woman’s Destiny”. The trilogy is a three-year commission by the Kokonainen Festival in Finland. The first quintet “Minna” was premiered at the festival in 2017 and the second quintet “Aino” was premiered at the festival in 2018.
The third quintet “Helene – Nuances from the Life of Helene Schjerfbeck” will get its world premiere this year on the 7th of August at the Kokonainen Festival 2020. It will be played by the incredible musicians Heli Haapala flute, Kristiina Salmi oboe, Pekka Niskanen clarinet, Jaakko Luoma bassoon and Tiina Karakorpi piano. As the name says, it is a selection of nuances and feelings from the life of the painter Helene Schjerfbeck (1862-1946). Schjerfbeck is one of Finland’s most famous modernists.
The art of Helene Schjerfbeck has been dear to me since I was a child and I painted my first copy (for own use) at the age of 12. In addition to loving her art I also felt a strong understanding and belonging to her as a person, as she throughout her life suffered from health problems and partly therefore was mostly melancholic and depressed. She never married, painted all her life and finished her last painting just one week before her death.

Schjerfbeck grew up under hard circumstances in a Swedish-speaking family in Helsinki. She got a hip injury at the age of four which contributed to that she would sit still a lot of the time, and probably therefore she dedicated a lot of her time to drawing. She was accepted to the Finnish Art Societies Drawing School at the mere age of 11 years and was granted a free place at the school. After she had completed her studies in Finland she continued with the help of grants her studies in Paris and England. She often recollects in her later letters that these years were the happiest of her life. In a letter from 1918 to Einar Reuter she writes “In my youth there was hope and love towards the work, it was fun to paint, the only fun thing at all – the time in Paris and the first year in England. Then in Finland there was no hope anymore, no joy, all that contributed to that I won’t say here.” In the first movement “Balskorna” (“Dancing Shoes”), named after a painting with the same name from 1882, I try to catch that joy of life. She returns to the motive of “dancing shoes” several times during her life, as she does to the happy memories from her time in Paris and England.
While abroad Schjerfbeck got engaged to an English painter,  They was engaged for two years before her fiancé broke up the engagement, probably because of her poor health. She burnt all his letters and she also asked her friends to burn all of her letters that considered him. Therefore we don’t know today who her fiancé actually was. The burning of all letters can also be heard in the first movement. In the 1920s she comments that through the broken engagement she knew what pain was, but that she was happy about that she had been able to choose art over all the duties she would have had as a wife.

Although she didn’t have to fulfil any duties as a wife, she still had to fulfil her duties of housekeeping. A lot of time and energy went to sweeping and washing the floors, cutting wood, lighting the fire, washing clothes, cooking and washing the dishes. As she was weak and sick most of her life, these duties robbed even more of her energy and limited the time she had left for painting. In a letter to Einar Reuter from 1932 she writes “They laugh at me when I say I have had a lot to do – I clean up, wash the dishes, cook food at times, sew clothes, mend all the clothes, and that is a lot, and every now and then I correct a painting — If I sit down to paint there will come bills, never a calm moment. If only I could be free from the household!”
In general everything that is considered to have to do with women’s daily lives has been classified as unimportant and uninteresting. Therefore it is not surprising that a female artist would make a painting such as Schjerfbeck´s “Byktork” (“Drying Laundry”) from 1883. It is a motive that probably no male artist would have chosen. In the same way as Schjerbeck illustrates the female everyday life with her art, I feel that as householding took such a large part of her time and energy, it is essential to dedicate a quarter of this piece exactly to laundry. In a letter from 1922 to Reuter she summarizes her wishes with the words “I am not looking for fame but for money – because with money I get the possibility to paint more, and that is more than fame and honour to me.” 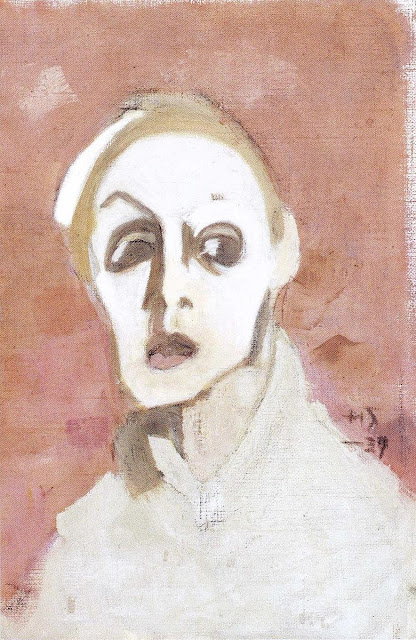 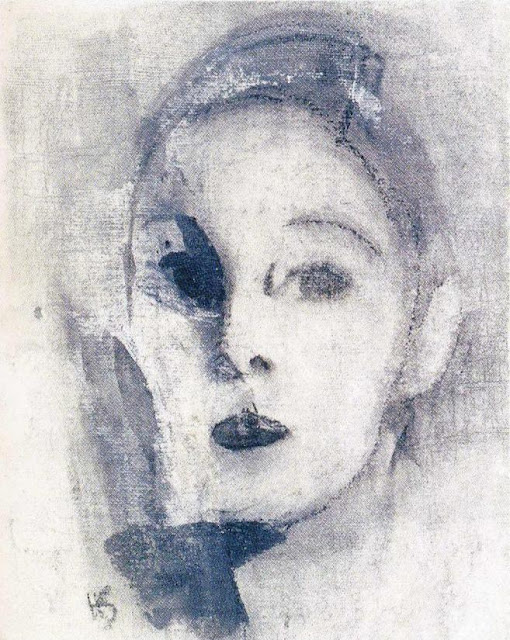 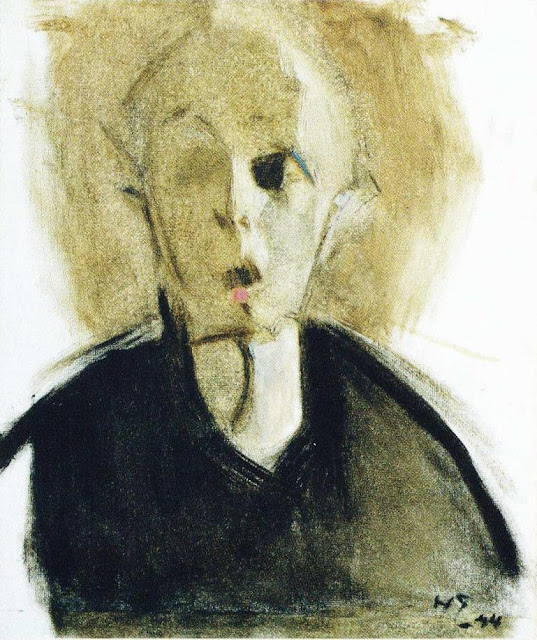 Schjerfbeck is maybe best known for her around 40 self-portraits. She writes in a letter to Ada Thilén in 1921: “When I now so seldom have energy to paint, I have begun with a self-portrait. You always have the model at hands, it is just not at all fun to see yourself.” She was also encouraged by the art dealer Gösta Stenman, who was her patron and made sure to both sell her paintings and create a financial independence for her. In two different letters from 1937 to her friend Reuter she comments on this “I am weak – but I am beginning on the self-portrait that Stenman wants to have.” and “Isn’t it strange that he still keeps on wanting to have self-portraits!”. She liked to investigate the different options she had and writes in a letter to Dora Estlander in 1944 “I’m looking at a book with painters self-portraits. They who embellish themselves are boring – Dürer and also others.” In 1921 she writes to Reuter “I drew in front of the mirror, after 5 minutes the face falls together tired. It will be continued tomorrow…This is the one life, an other hidden current is one’s own real one.” This own real one she always seemed to look for in all of her art. The third movement “Sjelvporträtt” (“Self-portraits”) is a passacaglia consisting of 12 chords. Everytime the chord progression is repeated it is instrumented slightly differently, with different nuances. The first four chords are also the main ingredient in the first and last movements and parts from self-portraits can be heard in the second movement, when she is longing to paint

The last movement “Konvalescenten” is named after one of her famous painting “The Convalescent” from 1888 which is also often called  “The Pearl of Ateneum” (the Finnish National Art Gallery). The motive is one of Schjerfbeck´s most used motives (in addition to her self-portraits). The painting was exhibited at the Paris Exhibition in 1889 (that time with the name “The first greenery”) and won a bronze medal of first class. The Convalescent can be seen as a contribution to the public debate, a tribute to Louis Pasteur’s discoveries of infectious diseases and their cures. The original title however seems to refer to an awakening after a winter or a disease and appears to be a belief in the future. The paining has also been interpreted by many as a sort of self-portrait, an insight and introduction to a new phase in her painting and that she finally felt liberated from the broken engagement. It is also speculated if she returned to the motive so often due to suffering a lot from her hip injury, and also her being ill during a large part of her life, and thus being a convalescent herself. But since she was a shy person and has not spoken about this topic, all this remains only as speculations.
Posted by Cecilia Damström at 08:46 No comments:

Monday, the beginning of a exciting week and also an exciting month! This week two world premieres, 20 minutes each!

Both are also going to be live streamed, so no need to risk getting Covid19 even if you want to hear it! If you can’t go to the music, music will come to you instead! 😍

Friday it’s the fifth anniversary of the amazing Kokonainen Festival! At this years festival my latest piano quintet “Helene - Nuances from the life of Helene Schjerfbeck” for flute, oboe, clarinet, bassoon and piano will get it’s world premiere.

On Sunday at the final concert of Pellinge Musikdagar my new song cycle “Framtidens skugga” to texts by Edit Södergran will get its world premiere at 3PM! It will be performed by the legendary world known mezzo soprano Monica Groop accompanied by the also highly acclaimed pianist Juhani Lagerspetz, both also professors at the Sibelius Academy.

Wishing you all a great week as well! 😘🌸
Posted by Cecilia Damström at 08:32 No comments: