Thursday March 6th. This morning stared splendidly; when I walked in to the interview at 9AM professor Rolf Martinsson told me first thing “You wrote an excellent exam. You scored full points!” After that they asked me about my music, what I expect from the programme and also told me that Malmö Academy of Music has two orchestras that play the works of the composition students, which sounds really exciting!

After the 20 min interview I decided to visit my friend Sanni Määttä in Copenhagen for the day. She is a first year violin student at the Royal Danish Academy of Music, but we know each other from Tampere. I took the Östersunds train, only 30 minutes but 80 Swedish crowns, to Copenhagen and found the Music Academy quite easily by the metro station Forum.

The Royal Danish Academy of Music was quite a peculiar building, partly it seemed nice and pompous with a nice statue in front of it, but then again for instance the toilets looked really old and shabby, so I got a quite ambivalent feeling for the building. But I had lunch there as well, and the restaurant was nice. At lunch I met a composer from Singapore, an American composer called Marcus Lease, a Norwegian composer Martin Bauck (who knew many Finnish composers and friends of mine through UNM), a Norwegian trumpetist Birgitte and two Finnish cellists. So already from this lunch meeting it’s easy to conclude that the Royal Danish Academy of Music is a very international school.

I only had time to stay the afternoon. It was a pity because in the evening the contemporary festival Pulsar had it’s opening concert. Pulsar is a festival for contemporary music, where mainly new music by the students of the Royal Danish Academy of Music is performed. My friend Matilda Seppälä will be arriving on Saturday (8.3) to visit Sanni for a week, so I will ask her how the festival was.

In the evening I travelled via Malmö to Gothenburg for visiting my friend Elias Liebendörfer (singer/actor/waiter). 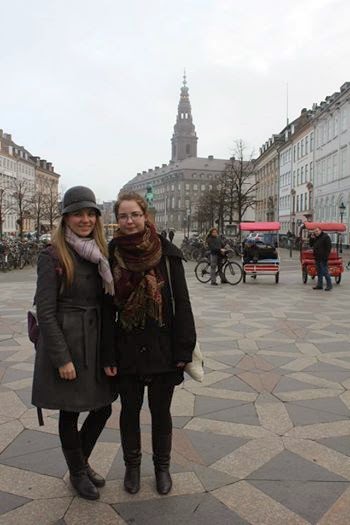 Sanni and me in Copenhagen

Posted by Cecilia Damström at 11:51